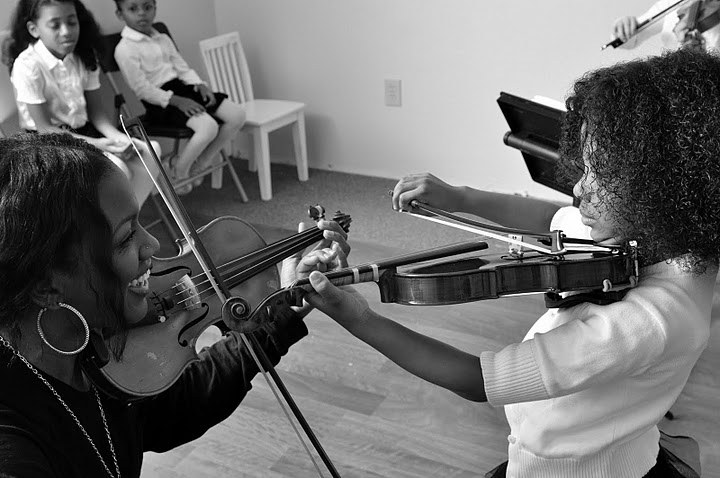 Megan Jenifer-Harris, violinist and educator, is the owner of String Presence Academy, Suzuki Violin Studio.  Megan has been in the music business for her lifetime and is committed to the  Suzuki philosophy of education.  She studied formally for several years through the D.C. Youth Orchestra Program under Mr. & Mrs. Lynn McClain.

Megan received both a Bachelor of Science degree in Music Engineering Technology and a Master of Business Administration degree from  Hampton University.  While at Hampton, she helped develop the first and only all student-based African American HBCU orchestra under the guidance of Professor Jerry Bracey.  In addition to her role as a founding member, she was also concert mistress of the H.U. Chamber Orchestra and String Ensemble.  She was featured with the Jazz Ensemble and was a participant in the Virginia Symphony Minority Fellowship Program.

Megan also participated in the H.U. Community Orchestra under the direction of the late Dr. James Herbison.  She was the first violinist in the Peninsula String Quartet.  Megan was also a staff teacher in the Hampton University Music Program during the summer months where she taught beginning piano, voice and electric bass. She received awards for outstanding achievement in the Fine and Performing Arts Department in 1997 and the Department of Music in 1999. Since 2011, Megan has been returning to her alma mater during the month of July to teach violin in the A+ Summer Residential Program, through the Freddye T. Davey Honor’s College.

Megan is a registered Suzuki Violin instructor with the  Suzuki Association of the Americas (SAA), where she received her initial training from Ronda Cole.  Megan has taught hundreds of beginning violin and viola students, several who have gone on to participate successfully in various orchestras, concerto competitions and rigorous music camps. Several of her former students have also been accepted into the Governor’s School for the Arts, have graduated from conservatory, traveled internationally & even composed original works performed by the Hampton Roads Chamber Players .

She has taught formally at Quality Music Center and Tidewater Adventist Academy in Chesapeake.  She has also taught at The Celestial School of the Arts and St. Mary Star of the Sea in Hampton, Music Art & Mind in Virginia Beach, The Crispus Attucks Cultural Arts Center in Norfolk, and The Jubal Arts Center in Suffolk, VA.  Megan Currently studies with Jorge Aguirre of the Virginia Symphony.  She is a member of the Suzuki Teacher’s Association of Hampton Roads (STAHR) and the SAA.

Megan is also the coordinator of Radiance String Ensembles where she plays both violin and viola.  She is part of the Strings & Things network under Nina Buzby.  She has also been contracted by nationally acclaimed musician, composer and string arranger, Nicole Neely of StringsChick Music Co.

Locally, Megan has performed with Aida Strings, Musica D’Archi, Grace Notes and The Fuzz Band for various engagements throughout the Hampton Roads Area.